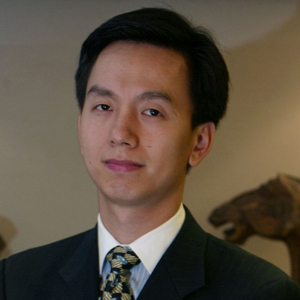 Mr. Wang Junyan (James) is the Founder and Chairman of China Alpha Fund Management (HK) Limited, a licensed corporation regulated by the Hong Kong Securities and Futures Commission (SFC). With over 20 years of extensive experience in financial markets and investment banking in mainland China and Hong Kong, Mr. Wang specialises in financing and investment, including but not limited to direct investment, asset management, corporate finance, project finance as well as mergers and acquisitions.

Mr. Wang is also the Founder of China Alpha Fund (which later rolled into the China Alpha II Fund). Under his leadership and management, the Fund has been established for 14 years with a cumulative return of 1,100% and around 20% annualised return since its inception to December 2015. The Fund has also become one of the best absolute return funds in Asia and was awarded as the “Best Emerging Markets Hedge Fund” in 2008 by Lipper Fund Awards.

Mr. Wang is one of the leading investment bankers and has been actively engaging in financial industry of China and Hong Kong since the early 1990s. Mr. Wang has also been participating in the establishment and development of a number of well-known financial companies, and assisting more than 300 Chinese enterprises in financing and investment. The merchant bank under his strong leadership was awarded as the “FinanceAsia Best Local Investment Bank Award in Hong Kong” in 2004.

Mr. Wang strives to dedicate to the community and make unremitting efforts for the development of the financial sector and education in Hong Kong. Mr. Wang is the present incumbent Adjunct Professor in the Department of Finance of The Chinese University of Hong Kong, the Chairman of the Board of Trustees of Lingnan (University) College, and the Director of Lingnan (University) College Educational Development and Research Foundation Limited and the Honorary Chairman of Hong Kong Alumni Association of Lingnan (University) College of Sun Vat-sen University Limited to promote the concept of a liberal arts education. To encourage social responsibility in Hong Kong among all enterprises and institutions around the world, Mr. Wang also serves as the Life Honourary President of “Egive For You Charity Foundation” and sponsors “Corporate Social Responsibility (CSR) Exchange Research Scholarship Programme” organised by The Chinese University of Hong Kong. In addition, Mr. Wang was awarded a Beta Gamma Sigma Chapter Honoree Award from The Chinese University of Hong Kong in recognition of his academic achievements and contribution to the society. The award is conferred upon those eminent business leaders who have furthered the ideals of the society through outstanding business and managerial leadership.