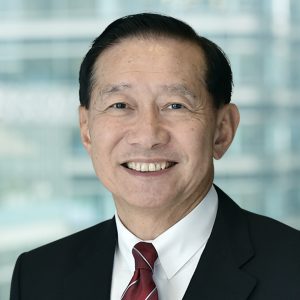 Peter Wong Tung Shun is Deputy Chairman and Chief Executive of The Hongkong and Shanghai Banking Corporation Limited. He is also a Group Managing Director and a member of the HSBC Group Executive Committee.

He also holds roles with the Hong Kong Monetary Authority’s Exchange Fund Advisory Committee, the Hong Kong Trade Development Council’s Belt and Road Committee, the Hong Kong General Chamber of Commerce and the Hong Kong Institute of Bankers. He has also been invited to advise on a number of committees/councils in mainland China, including as a Member of the 13th National Committee and the Vice Chairman of the Committee for Agriculture and Rural Affairs for the Chinese People’s Political Consultative Conference, an Economic Advisor to the Governor for the International Consultative Conference on the Future Economic Development of Guangdong, a Member of Chongqing Mayor’s International Economic Advisory Council, and a Board Member of the China Banking Association.

Mr. Wong’s banking career began in 1980 when he joined Citibank. He then moved to Standard Chartered Bank in 1997.

Since 2002, Mr. Wong has been appointed as an adjunct professor by CUHK Business School’s Department of Marketing.