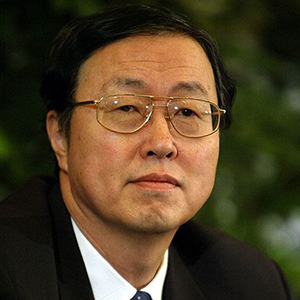 Dr. Zhou Xiaochuan was born in January 1948. He is President of China Society for Finance and Banking, Vice Chairman of the Boao Forum for Asia and China’s Chief Representative to the Boao Forum, and a professor and tutor of doctorate candidates at the Tsinghua University’s School of Economics and Management and PBC School of Finance.

After graduating from the Beijing Institute of Chemical Technology in 1975, he received a PhD degree in system engineering in economics at Tsinghua University in 1985. Between 1979 and 1985, he did research and policy analysis for the reform of China’s economic system and in a large number of economic subjects. From November 1986 to September 1991, Dr. Zhou was a member of the State Commission for Restructuring the Economic System. In the period, he was also a member in the State Council Leading Group on Program of Restructuring the Economic System and a Deputy Director of the Research Institute of Economic Structural Reform in 1986 and 1987; from December 1986 to December 1989, he was Assistant Minister in the Ministry of Foreign Trade and Economic Co-operation (which is now the Ministry of Commerce). From 1991 to 2002, he served on a number of positions, including as Vice President of the Bank of China, Administrator of the State Administration of Foreign Exchange, Deputy Governor of the People’s Bank of China, President of the China Construction Bank, and Chairman of the China Securities Regulatory Commission. From December 2002 and March 2018, he was Governor of the People’s Bank of China. From January 2003 to June 2018, he was Chairman of the Monetary Policy Committee of the People’s Bank of China. From March 2013 to March 2018, he was vice chairman of the 12th National Committee of the Chinese People’s Political Consultative Conference.

Dr. Zhou Xiaochuan is a member of the Group of Thirty (G30) and Chinese Economists 50 Forum. Dr. Zhou is among the first group of Chinese experts who are entitled to receive special government allowance, and the author of over 100 academic papers and more than 10 books, among which the following publications have won awards: Restructuring the Relationship between Enterprises and Banks, Sun Ye-fang Economics Essay Award, 1994; Towards an Open Economy, Ann Tse-Kai International Trade Essays Award, 1994; Social Security: Structural Reform and Policy Proposals, Sun Ye-fang Economics Essays Award, 1997. The Theory of Holistic and Coordinated Reform with Professor Wu Jinglian and Dr. Zhou Xiaochuan as the major proponents won the China Economic Theory Innovation Award in 2010. In 2015, Dr. Zhou’s book titled “The Global Financial Crisis: Observation, Analysis and Countermeasures” won the 1st Sun Ye-fang Financial Innovation Award.