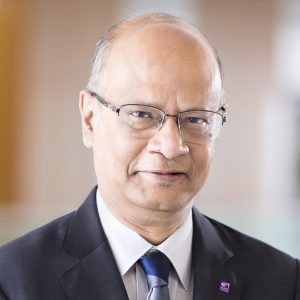 Prof. Sudipto Dasgupta is currently a Professor at the Department of Finance at The Chinese University of Hong Kong. He previously held academic positions at Lancaster University (where he was Distinguished Professor of Finance), The Hong Kong University of Science and Technology (where he was Department Head during 2013-2015; Chair Professor from 2008, and Professor from 2004), The Jawaharlal Nehru University, The Indian Statistical Institute, and The University of Southern California. He was the Managing Editor of the International Review of Finance from 2008 to 2020, and is a Senior Fellow of the Centre for Economic Policy Research (CEPR), the European Corporate Governance Institute (ECGI), and the Asian Bureau of Finance and Economics Research (ABFER). He is currently a board member of the Financial Management Association and Academic director for the Asia-Oceania region.

Prof. Dasgupta obtained his Ph.D. in Economics from the University of Southern California in 1988 and has been teaching Finance since 1993. He has broad research interests with a focus on Corporate Finance.

Prof. Dasgupta’s early work was on Applied Game Theory and the Theory of Industrial Organisation. He worked on the design of procurement auctions and on takeover bidding environments. He later worked on topics such as the role of firm leverage on worker-firm bargaining, on information sharing among competing firms in an oligopolistic market structure, and the effect of leverage on product market outcomes. Most of this early work was theoretical in nature.

His more recent work includes papers based on empirical methodology and he has examined such issues as the role of Socially Responsible Investors in mitigating the environmental impact of emissions, how air pollution affects cross-border mobility, capital flows, and asset prices, how social connections between upstream and downstream managers encourage innovation, what M&A conference call transcripts reveal about issues that matter for mergers involved in M&A deals, etc. His earlier empirical work focused on the capital structure policy of firms, the effect of financial constraints on firm behaviour (including inventory investment and the allocation of cash among alternative uses), the reputational effects of large customer accounts on the loan spreads of supplier firms, whether the managerial labour market rewards top executives for their perceived ability, whether more intense product market competition increases firm efficiency by accelerating the replacement of less efficient managers, and so on.