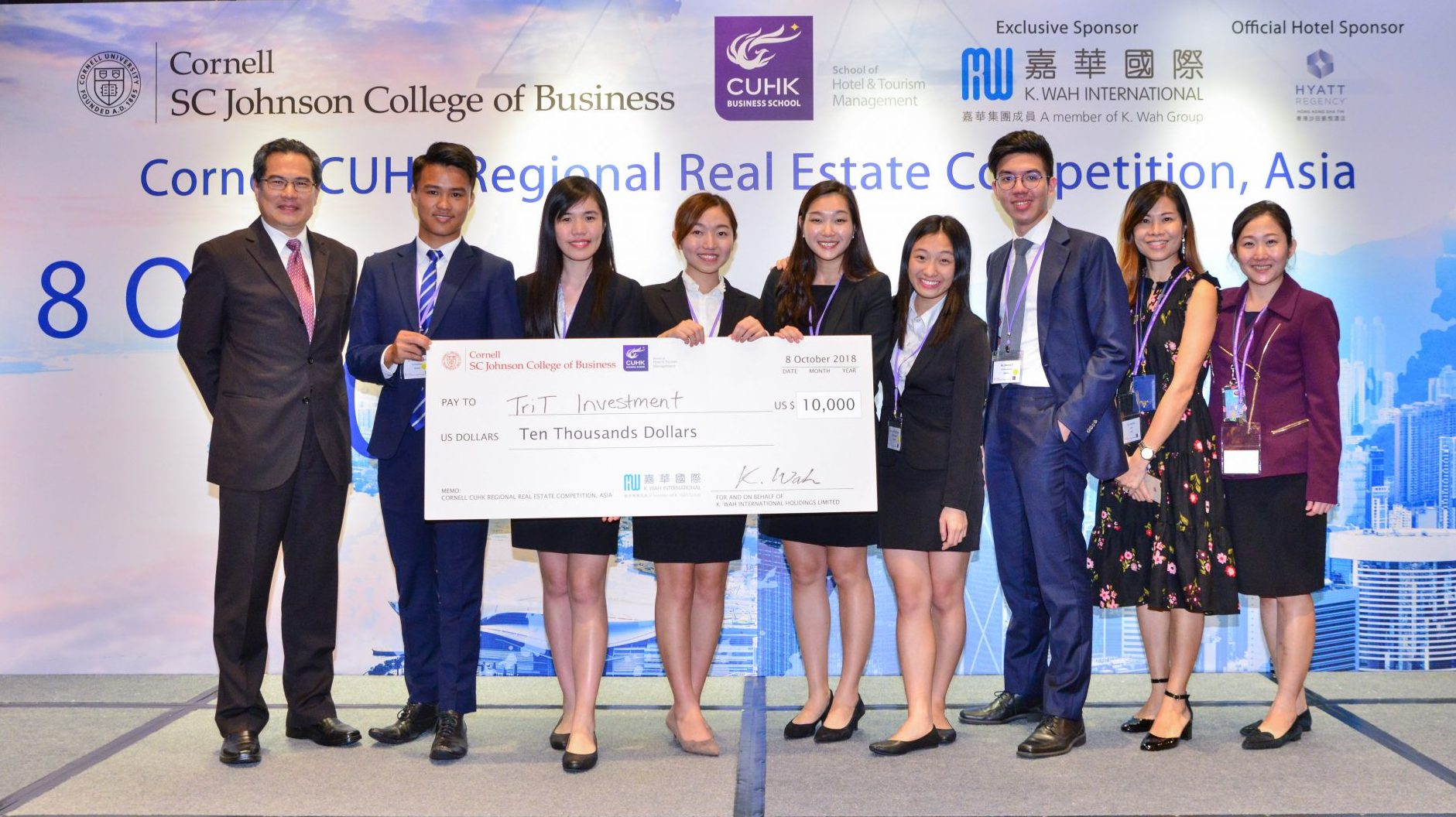 Eight teams from schools in Hong Kong, mainland China, Taiwan, Indonesia and Korea competed on 8 October in the Cornell CUHK Regional Real Estate Competition, Asia sponsored by K. Wah International Holdings and hosted by the Centre for Real Estate and Finance at Cornell University and the Centre for Hospitality and Real Estate Research at The Chinese University of Hong Kong (CUHK).

The three winning teams from CUHK Business School, University of Hong Kong and Hong Kong Polytechnic University won K. Wah prizes of US$10,000, US$8,000 and US$7,000 respectively, and will go on to the Cornell International Real Estate Case Competition in New York City from 12-13 November.

Team CUHK was formed by Miko Ngai (Hotel and Tourism Management [HTMG], Year 4), Dennis Ho (HTMG, Year 4), Iris Jang (HTMG, Year 5), Christie Lau (Global Economics and Finance, Year 4), Heidi Chan (Quantitative Finance, Year 4) and Kenneth Lai (Insurance, Financial and Actuarial Analysis, Year 4). The team shared that they prepared for the competition by reviewing past practice cases from the U.S. competition and seeking feedback from their faculty and industry advisers. Through consolidating the comments and their findings, they tried to make improvements every time.

The six year four students that made up ESTAB, Polytechnic University’s team, shared that this was the first time they participated in a case competition because competitions related to this industry is rare and they jumped at the opportunity to do so. Despite the intensity of the competition, they had already considered themselves winners after finishing a long day of presentations.

Before the judges went on to present the awards, Mr. Michael Dang, President of Anpha Holdings gave the teams a glimpse of what actually happened in the real life transaction of the case analysis, sharing that as a real estate developer it’s not always only about the ROI but factors such as emotional attachment influence their decisions as well.

Mr. Daisuke Kitta, Head of Real Estate Japan; Senior Managing Director of the Blackstone Group, gave feedback to all the competitors. He commended them for their creativity, while giving them three key takeaways on behalf of the judges, including the crux of the 60-second elevator pitch, importance of quants as well as to always keep their recommendations simple.

The teams had five days to analyse an actual transaction and present their analysis and proposal to a panel of international real estate executives. They could not reveal their universities and had to remain anonymous in order to avoid any biases throughout the judging process. The judging panel comprised professionals from the real estate industries, including private equity funds, investment banks, developers and real estate consulting firms. Apart from judging the presentations, these industry experts also shared their feedback with teams, sharing their professional knowledge and expertise in the real estate industries. 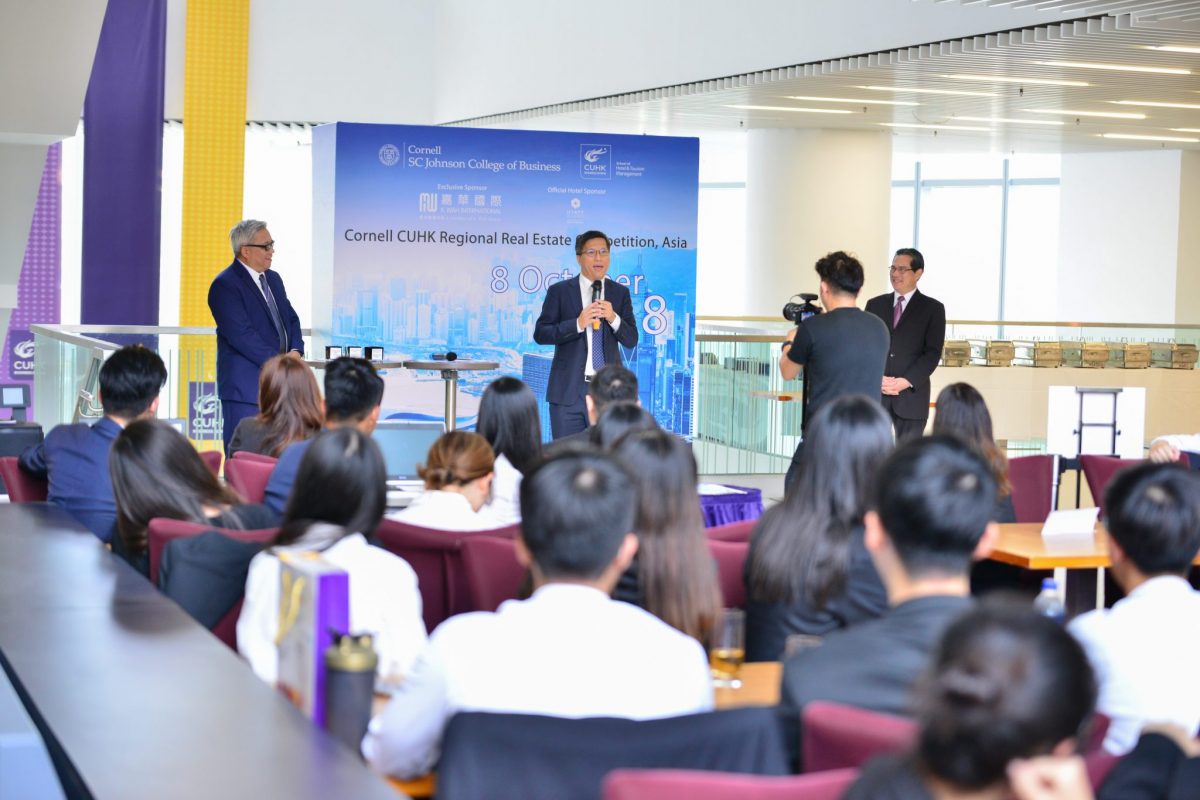 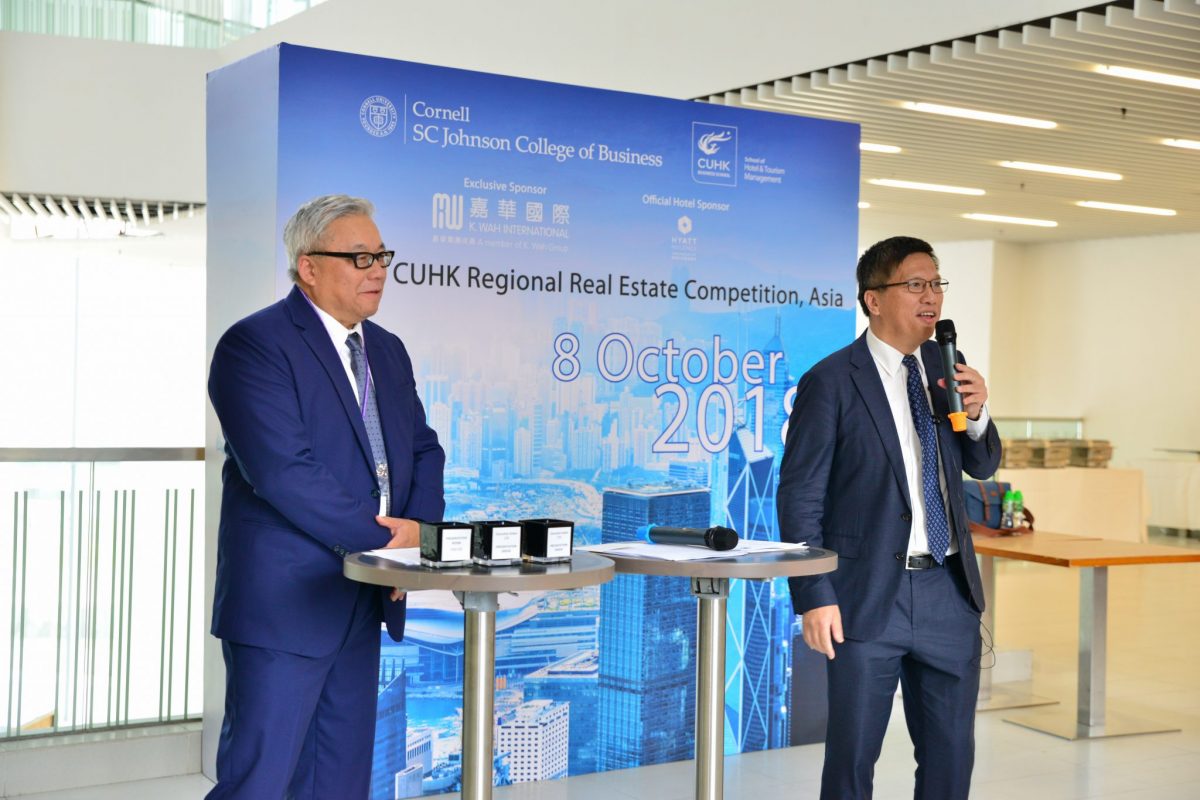 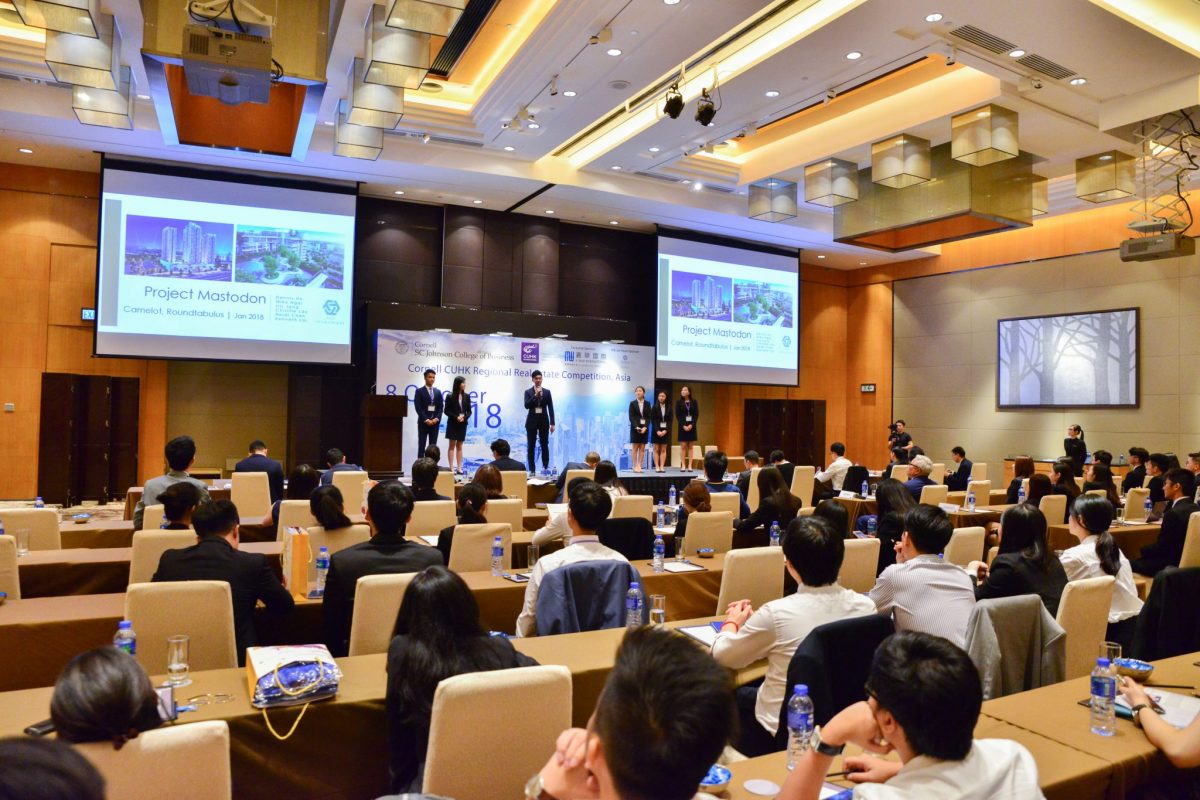 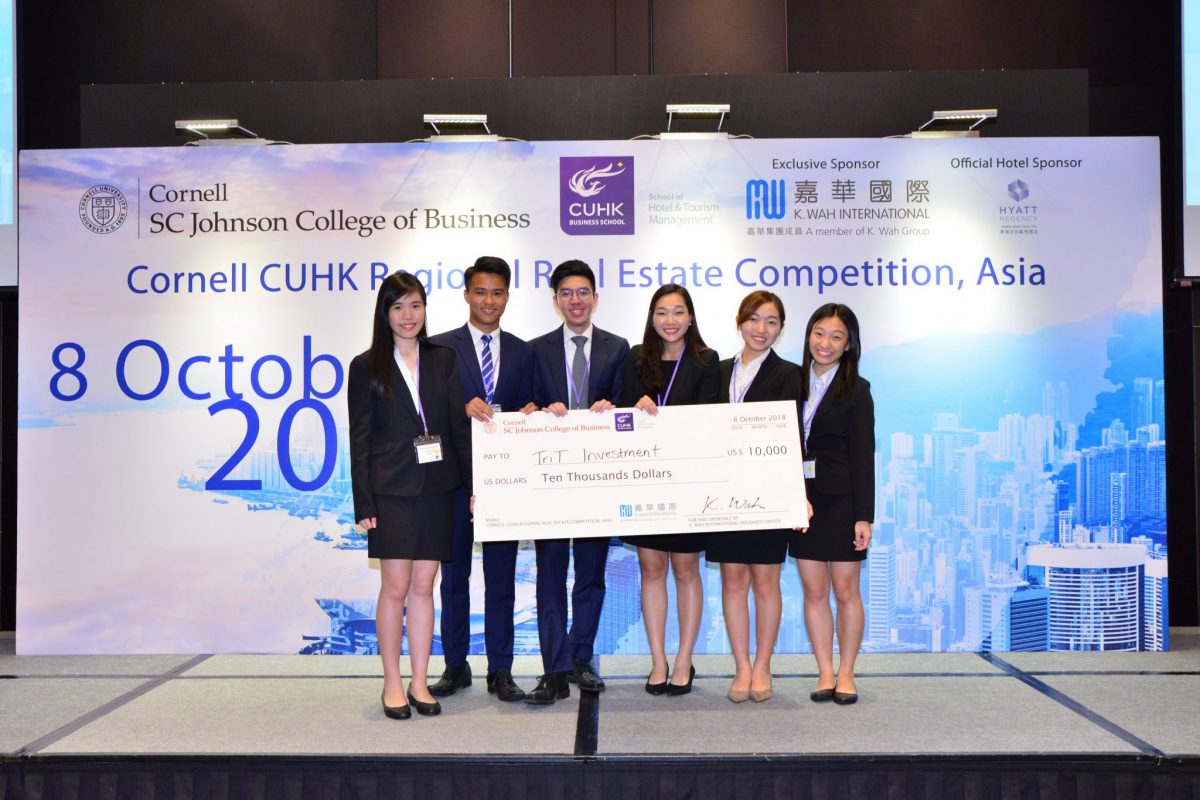 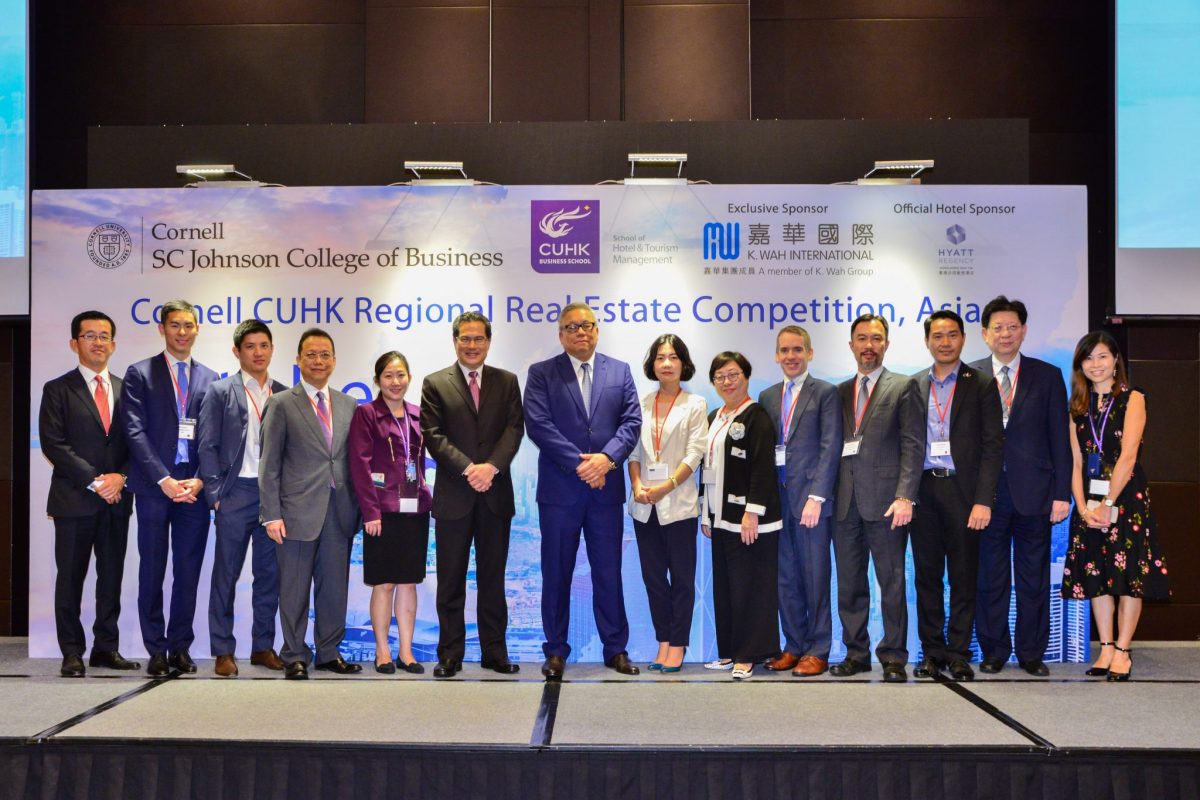