News Featured Stories Global Alumni Forum 2020: What It Will Take to Rebuild, Recover and Reinvigorate from COVID-19

Global Alumni Forum 2020: What It Will Take to Rebuild, Recover and Reinvigorate from COVID-19

Business leaders and thinkers on what it will take for the world to recover, rebuild and reinvigorate amidst the disruption brought about by COVID-19

The spread of the coronavirus has put a dampener on economic growth and disrupted business activity around the world, but that just makes it even more important for current and future leaders to look forward and adapt as well as innovate to overcome the challenges brought about by the difficult environment.

That was the collective message that speakers sought to convey in the 2nd annual Global Alumni Forum (GAF) held by The Chinese University of Hong Kong (CUHK) Business School in November and December 2020. This eagerly awaited event, held this year under the overarching theme “Recover – Rebuild – Reinvigorate”, sought to shed a light on the way forward for individuals, companies as well as economies not only on how they can recover from the economic shock brought about by the spread of COVID-19, but how to rebuild careers, businesses and brands to achieve even higher levels of success under the new normal.

To spice things up, the in-depth talks were held together with a series of online fundraising auctions where participants bid on one-of-a-kind items and experiences ranging from tea with CUHK’s Vice-Chancellor Prof. Rocky Tuan, dinner with one of Hong Kong’s most prominent business leaders, to calligraphy and autographed book collections. The proceeds of the auction will be donated to the CUHK Business School Development Fund to support education, global connection and facility advancement.

Out with the Old and In with the New? 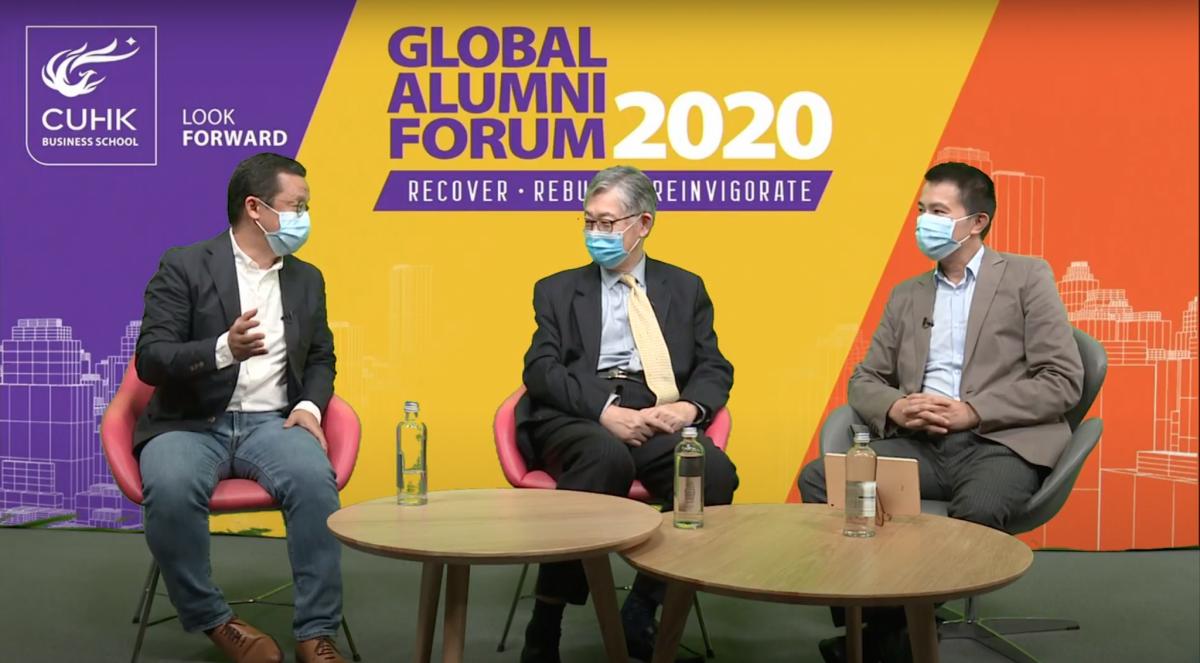 In the first episode, conducted in Cantonese, two well-known Hong Kong business titans examined what the rapid change brought about by the pandemic means for the ongoing struggle between the old economy – characterised by the predominate use of tangible assets, with businesses taking advantage of the new economy, which espouses the use of cutting edge technologies to create new products and services. This the topic that Shih Wing-ching, Founder and Chairman of Centaline Group and Ricky Wong Wai-kay, Vice Chairman and Group CEO of Hong Kong Television Network Limited, discussed in detail.

“A positive thing about the pandemic is that it pushed us to improve.”
— Shih Wing-ching

“Successful companies often indulge in their past glories, so they are less willing to change,” said Mr. Shih. “A positive thing about the pandemic is that it pushed us to improve.”

Mr. Shih said successful companies often indulge in their past glories, so they are less willing to change. Traditional industries in Hong Kong, including real estate agencies, can consider switching to an “Internet+” model, referring to using the internet to provide extra services to complement conventional business activities. For example, his company has started using virtual reality technology for online property listings.

“The most important thing is you need to imagine what the world will be like after 10 years.”
— Ricky Wong

On the other hand, Mr. Wong, who launched Hong Kong’s biggest online shopping platform, HKTVmall, said that despite his success in the “new economy”, the old and the new are actually complementary.

“For example, if you want to be an Uber driver, you still need to have an actual car. Technology just adds another layer to the existing business model,” Mr. Wong said. “The most important thing is you need to imagine what the world will be like after 10 years. We cannot stop the development of technology. But we can change ourselves to adapt to the future.”

According to both speakers, the essence of change is to be flexible and imaginative when using technology to enhance existing practices. They added that the younger generation in Hong Kong must be ready to adapt to the changes brought on by new technologies, and students should think carefully when choosing university majors. “University is not only a place to learn practical skills but also a place to teach you a new way to think. If you can think critically and creatively, then you will know how to create a favourable condition for yourself even in the toughest time,” said Mr. Wong, alumnus of CUHK EMBA programme.

As the engine of the global growth, China’s path to rebuilding its economy under COVID-19 and the ongoing China-US friction is of paramount importance to the world’s economic recovery. This was the focus of the second episode, which featured a talk in Putonghua by Justin Yifu Lin, Dean of Institute of New Structural Economics at Peking University and former Chief Economist and Senior Vice President at the World Bank.

“Next year will be full of uncertainty. If the COVID-19 vaccine can be ready for not only for one or two countries, but for all those affected, then I think China’s GDP will grow at a relatively fast pace,” Prof. Lin said, citing figures published by the International Monetary Fund (IMF) that projects an 8.2 percent growth for China in 2021.

“The real problem between China and the US is resistance from the existing leading superpower against the fact that it is likely to be surpassed by another.”
— Prof. Justin Lin

Although the fight against the coronavirus has hindered the growth of China’s economic development, Prof. Lin highlighted that it is friction between the US and the Asian economic giant that stands to affect global economic recovery on a more significant level. He said the world must be prepared that friction between the two superpowers may continue in the near term, even with the inauguration of a new US president in Joe Biden.

“The real problem between China and the US is resistance from the existing leading superpower against the fact that it is likely to be surpassed by another. The new US president may make use of more civilised rhetoric, but the essence of the problem would not change,” said Prof. Lin.

Prof. Lin pointed out that an economic decoupling between China and the US would not be advantageous to the latter nor to other western countries because China is the main market for their products, especially in technology. To cope with this ongoing friction, Prof. Lin said China should continue to maintain development at a fast pace, as well as deepen its economic reforms and opening-up policies. Above all, China must seek to increase its GDP per capita, which is an important indicator of people’s living standards and the country’s overall economic development.

The third and final episode was conducted in English and featured Richard Baldwin, Professor of International Economics at the Graduate Institute of International and Development Studies in Geneva, Switzerland and who served as a Senior Staff Economist for President George H. W. Bush’s Council of Economic Advisors.

Using a new term he coined called “globotics” (an amalgamation of the buzzwords globalisation with robotics), Prof. Baldwin explained that digital technology is accelerating the evolution of white collar and professional work due to increased automation and globalisation.

This is affecting both the higher value-adding white collar jobs from legal and medical services, to journalism and finance, to more mundane roles such as data entry. And while businesses have faced offshoring and automation in the past, the current wave is different in that not only is it affecting white collar professions for the first time, but it has been accelerated by the spread of COVID-19.

The increasing sophistication and application of machine learning has also opened up these higher value jobs to be automated, since computers have made marked strides in conducting more complex tasks such as recognising natural speech and translating foreign languages in the last five years.

“Telemigration and software automation will transform almost every service job in some way but replace very few because there’s always something that they can’t do,” said Prof. Baldwin.  In the short to medium term, it will create some hardships as jobs are being displaced by these new technologies faster than other jobs are being created. “The good news is that new jobs will appear, as they have done so in the past,” Prof. Baldwin said, adding that new opportunities will appear in roles that cannot be automated or offshored.

These include “human” roles such as those requiring strong creativity, grasp of ethics, the ability to deal with unknown situations, managing and motivating large groups of people, or the showing of empathy. Opportunities will also arise in jobs that cannot be done remotely, he added.

“In the short run, digital technology is destroying jobs faster than it is replacing them. Managing that transition is the challenge that we will need to meet.”
— Prof. Richard Baldwin