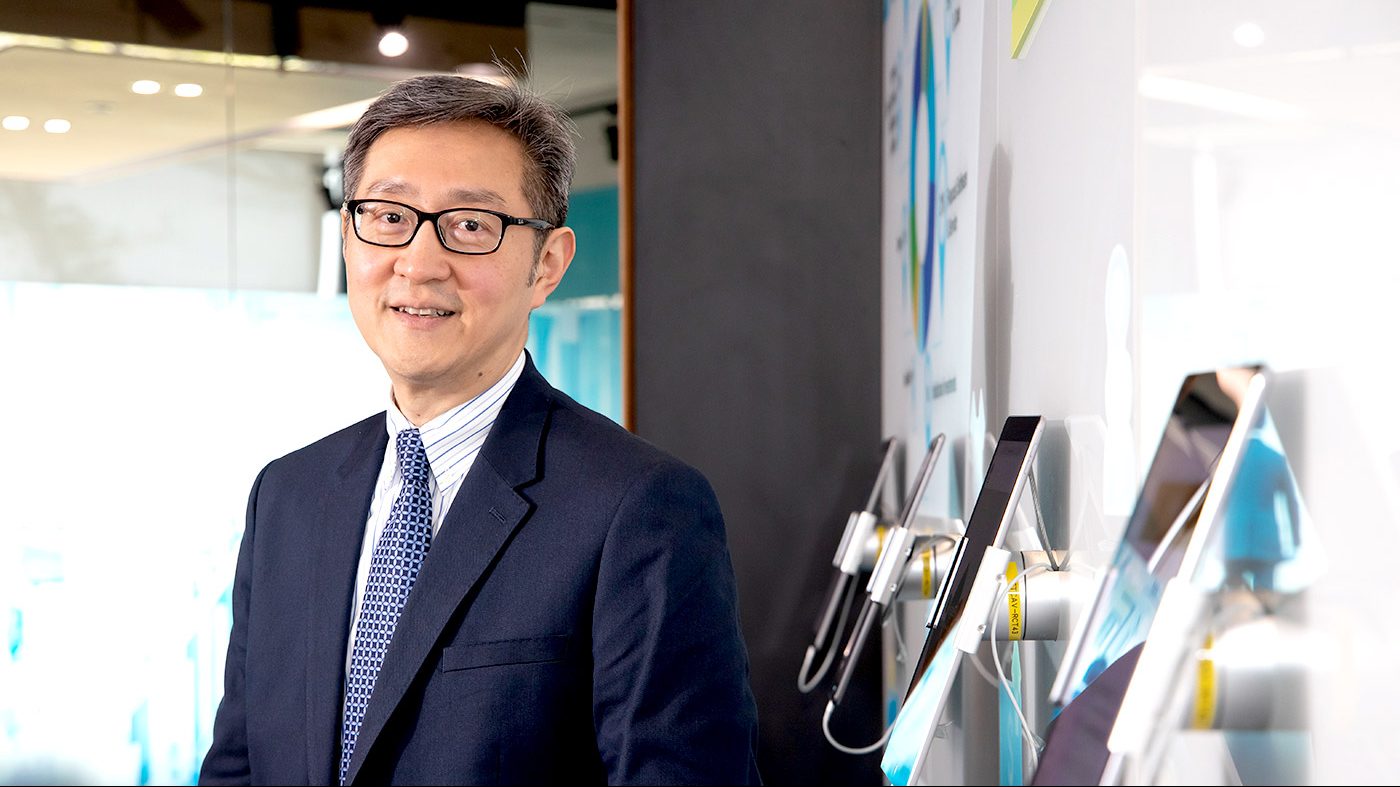 The winter sun lit up the wall in the conference room, making the three words on the wall even more eye-catching: creativity, imagination, and inspiration. In front of this wall was seated the CEO of Cyberport, Mr. Peter Yan (BBA in Marketing 1985), whose career is as shiny as the day outside. He has worked in the IT industry for over 30 years, holding key positions in various large consultant companies and IT companies, including Accenture, Computers And Technologies Holdings Limited, and SUNeVision.

His firm handshake bespoke an energetic personality. No sooner had he taken the helm at Cyberport last April than he met with representatives from the banking, IT and multimedia industries to get a grasp of their difficulties, and match them with startups in Cyberport. He said, “Cyberport has a good foundation and equally good facilities, but improvements can still be made by incorporating smart living into its office buildings, hotels and cinemas. And the shopping mall will do better by adopting retail technology.”

Cyberport is intent on expanding the following three application areas: FinTech, smart living, and e-sports entertainment. It also responds actively to global trends, including big data, blockchain technology, virtual banking, cybersecurity technology and regulatory technology. Mr. Yan said that Hong Kong enjoys an advantage in FinTech, since as a financial hub the territory has a sound legal system and professionals with international exposure. Many international financial corporations are willing to call Hong Kong home for these reasons.

Talent is what Mr. Yan values most. Hong Kong has a wealth of financial talent, and Cyberport, home to over one-third of all FinTech companies in Hong Kong, will focus on strengthening its capacities in areas like insurance and compliance technology. “The supervision of insurance and financial industries is getting more and more stringent. To effectively supervise each transaction and conduct checks on new insurance and financial products will increase the compliance cost, and therefore AI professionals are in high demand.”

Some traditional finance companies may not have a handle on the future trends of FinTech. Cyberport not only provides seed funding to startups, but also fosters ties between local and overseas institutions to encourage exchanges. Mr. Yan attaches much importance to training, and is always willing to share his views on human resources development with the Business Administration and Engineering Faculties of CUHK. Delighted to see CUHK launch a new undergraduate programme in FinTech, he believes that the programme will provide students with a good knowledge of the trends of the field. Cyberport will also offer internship opportunities, allowing the interns to widen their horizons.

Cyberport’s e-sports stadium, scheduled for completion in June, will come with arenas and several screens for live broadcast. Cyberport plans to host nearly 100 e-sports events annually, and hopes to give young people a better understanding of the technology and industry chain related to e-sports. Some people see e-sports as a form of addiction, but Mr. Yan begs to differ. “Young people grew up playing e-sports in one form or another, which should be seen as giving us an opportunity to get our younger generations to better understand the importance of self-management. This emergent industry also incubates startups and creates jobs in e-sports competitions hosting, event planning, facilities management, etc.”

He continued, “The Faculty of Business Administration was known for its solid academic training, and I didn’t hesitate to apply for admission to the BBA programme. I also liked computer science. When I took up a summer job in a computer company, my colleagues showed me how to put together a computer. I went to Apliu Street to shop for parts such as motherboards, and the satisfaction I got from piecing together a computer from scratch was really great!” His fascination for tech products has since been an integral part of his life.

Mr. Yan thinks that when he started out in the IT industry, the hardest part was not the long working hours, but the lack of a business model: each step forward could bring you either nearer to or farther away from your goal. “There was once a research claiming that it is impossible to do a 100-metre run within ten seconds. No one questioned that until someone succeeded in doing the ‘impossible’, and then other people would try to do even better. The crux is whether or not you have the courage to be the first record-breaker. Tech startup is similar in this respect: in the face of uncertainty, you have to hold your own and stick to your goal.”

A tech startup has a short life cycle, as new technologies keep emerging. Mr. Yan hopes that he and his colleagues together could create an open environment for the younger generations to learn new things, and give them the support they need. “When I was a CUHK student, I enjoyed taking general education courses. I took courses in astronomy, science, and Buddhism, and our teachers were first-rate scholars. There were active exchanges between students, and everyone was eager to learn. Now I frequently interact with young startup entrepreneurs, and we learn much from one another. Hong Kong owes its success to those who are prepared to rise to the challenges of the times.”